As dumb as it gets. Bernake, in an effort to appear a lot smarter than he is, said, "there is no one cause for yesterday's meltdown" and the market responded nicely and went up a hundred points to finish up 52 or so. Marlyn, in an effort to keep from blowing the coffee that he just drank out of his nose, gargled out a strangled, "Bull Snot"! Which caused his Bride to ask if he were OK. Marlyn then attempted to explain what an idiot Bernake is and his Bride just patted him on the head and said, there, there dear - go make us some money. Leave it to the Bride to keep things in perspective - that's why I love her so.

Girls and boys I hope you were all elbows deep today - I know I was - this was truly amazing especially the last hour or so. Everything just turned glorious and life doesn't get any better than this.

I grabbed up a couple of stocks I've been waiting for a pullback to buy - RIO and AKS first thing out of the box this morning. I got into RIO a little early but AKS came along just fine. Both in the green in my account now but it was touch and go for awhile there with RIO. I didn't mind since I'm pretty sure it is going to continue to climb for the next whatever. I'm planning on holding these two for awhile - if they continue to go up.

Also picked up GGB and that was just because it was on my list of 12 candidates. At the end of the day I added TIE to my trading portfolio.

The model portfolio that I spoke about in this morning's post gained 3.18% and SPY (the benchmark) gained 1.48%.

I didn't do any day trading today although it would have been a perfect day for it. I wanted to concentrate on getting some things in place going forward - this kind of opportunity doesn't happen only so often (according to Dr. Brett 5 times going back to '98) and you have to take advantage of the good fortune when you stumble on to it or it stumbles on to you.

I did watch the market though and I tried to learn everything I could about the day after chaos that was possible to learn. That's how you stay prepared learn something new every day. Another thing I did was to build a Proshares inverse ETF list for use in Quote Tracker. Next time the market starts to fall I'll bring that out and watch those charts for day trades.

The three pals (GOOG, MSFT, AAPL) all went up, of course, but GOOG only made 68 cents. If that doesn't throw some warning signs up I don't know what will. AAPL was only a cent behind at 67 cents and MSFT did the best of all with 30 cents (based on percentage gained). I'm not sure if I were holding GOOG that I'd wait much longer for it to hit 520. It probably will but you wasted a lot of trading capital today on a stock that may or may not go anywhere. Now that's not a recommendation to sell GOOG just something to consider when you are making your decision.

I saw a bunch of this today -

That little DOJI suggests caution. And after the smack down yesterday one would expect traders to be a bit cautious. Of course I also saw a lot of this -

- which reader's of this BLOG will quickly identify as a BOB!. The part I like about this BOB is the volume. That suggests some conviction in the move. So we have caution and conviction - I wonder which way it's going to go tomorrow.

The four indices that we follow - DIA, IWM, SPY, and Q's all printed a black/red candle in the last hour. GS printed a DOJI. That is good - shows traders taking a breath. Of course the VIX began its trek back to low-number-land but remains more than 10% greater than its 10-period moving average. And this indicator continues to go down.

That's expected of course because all indicators based on price take a little while to work - if the market goes up again tomorrow - and I don't know why it wouldn't - we will see it turn at that time. And that will be the major indicator to begin buying stocks.

Of course the up/down ratio recovered too and output a 54% or neutral reading.

Given all of the positives I'm calling tomorrow for the bulls - an up day.

I think this is the last post for February - I just noticed that it will be number 113. There are entire BLOGs out there that don't have 113 posts in their entire existence. At any rate that is a record for me and it is unintentional I just have a lot to say. But as long as I continue to enjoy doing this I will continue to attempt to amuse, confuse, but never abuse, you my dear readers. See ya's tomorrow.
Posted by Marlyn Trades at 3:22 PM

I hope you keep it up. I thoroughly enjoy your blog.

You made some good trades today, I highlighted you on my blog 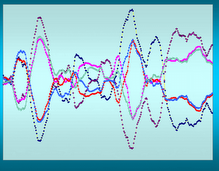